“Thus, national policies affecting capital flows can transmit multilaterally. This transmission has not been fully appreciated by national policymakers. Further, they may not have incentives to take full account of the cross-border effects of their policies. Looking ahead, the upward trend in the volume of capital flows can be expected to continue, making it ever more important to address the associated cross-border risks.”

“These two-way capital flows created a complex web among markets and institutions, some regulated and some not. Against this background, case studies were prepared for European banks and U.S. money market mutual funds (MMMFs) and for German banks and U.S. mortgage-backed securities (MBSs). Another important case is that of the near failure of the American International Group (AIG), which turned out to have complex and systemically cross-border linkages with other global institutions and markets.”

“Why might we expect a rise in U.S. bond yields to raise bond yields in other countries? First, openness of financial markets and arbitrage opportunities may mean that interest rate shocks are transmitted across economies. Second, a closer real integration of two economies may imply that a monetary policy shock or an inflationary shock in one economy may lead investors to expect similar developments in another, thus inducing a significant transmission of shocks in bond markets and money markets.”

Vivian Z. Yue and Leslie Shen, International Spillovers on Government Bond Yields: Are We All in the Same Boat?, August 01, 2011, Blog at website of the Federal Reserve Bank of New York.

“The trend toward greater diffusion of authority and power occurring for a couple decades is likely to accelerate because of the emergence of new global players, increasingly ineffective institutions, growth in regional blocs, advanced communications technologies, and enhanced strength of nonstate actors and networks.”

The words in the quotes above are dispassionate, but the realities to which they refer get in our faces every day.  The mix of global economic processes and competitive and uncoordinated national policy making creates a bubbling soup of chaotic change.  (Go-it-alone economic policy making by sub-national and regional governments surely contribute to this soup of chaotic change as well.)

This environment makes decision making and planning very difficult and prone to error for the majority of the world’s investors and business owners and managers. It destabilizes the global world of work and damages the families and communities that depend on that world.  And it confounds policy experts because it is not possible to find logic in the illogical.

Moreover, this environment plays into the hands of the bad actors in the world economy, who promote and thrive on the high volumes of misunderstandings and errors that now plague economic and policy decision making at every level of organization in the world economy. 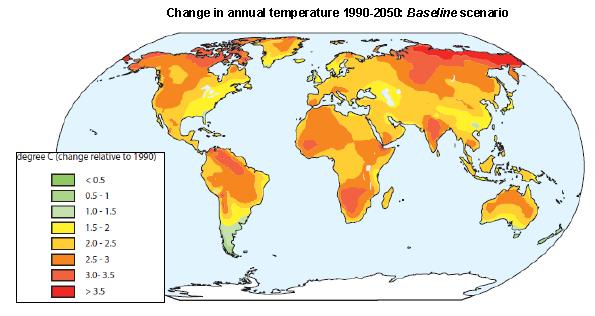 From Key Findings on Climate Change, THE OECD ENVIRONMENTAL OUTLOOK TO 2050 (forthcoming, 2012), Organization for Economic Cooperation and Development.

“New figures from the U.N. weather agency Monday showed that the three biggest greenhouse gases not only reached record levels last year but were increasing at an ever-faster rate, despite efforts by many countries to reduce emissions.”

Primary sectors such as agriculture, forestry and fisheries will be affected more severely than others. The attraction of tourist destinations will change. … Ski resorts at low and medium altitude could be affected by reduced snow cover …The likelihood of the development of extreme weather conditions will affect the insurance industry, which will be forced to pass on the rising cost of damages to other economic sectors … Jobs will be created in companies that can take advantage of opportunities created by climate policies and jobs will be lost in companies that cannot adapt.

About 1.3 billion people, or 40 percent of the economically active people worldwide, work in agriculture, fishing, forestry, and hunting or gathering.

In recent decades, the world’s communities and working families have faced increasing employment and income instability as the pace of technological change and the pace of transnational capital transfers have increased.  More and more communities see whole industries come and go; more and more working families now cope with recurring periods of unemployment and underemployment; increasingly, working people find themselves having to negotiate major job transitions (many of which require investments in retraining and many of which result in lower wages and benefits); larger numbers of workers become trapped in long-term unemployment.

Climate change is adding to global employment and income instability through its impacts on the global distribution of investment opportunities and risks.  Primary impact is on climate sensitive industries (e.g., agriculture, fisheries, forestry, tourism, insurance, health care — in response to changing disease threats, emergency services).  Changing global weather patterns are transforming local and regional mixes of market opportunities, production and distribution costs, and risks to communities across the world.  Older business models and technologies are being modified or abandoned and replaced with different business models and new technologies, and the responsibilities assigned to governments and non-profit organizations are being transformed, as the consequences of climate change accumulate.

The contribution of climate change to global employment and income instability extends well beyond the most climate sensitive industries.  Weather is totalitarian: every aspect of our lives is affected to some degree by its patterns and changes, from housing codes to travel decisions, from clothing requirements to food choices, from health care requirements to leisure activity decisions.  Thus, as the consequences of climate change accumulate, we will make large and small changes to the way we live.

In some parts of the world, the changes made will be substantial and rapid, generating newsworthy investment and employment upheaval.  In other parts of the world they may be minor.  But even minor individual changes, when made in a short time span, can aggregate into a force that unsettles business opportunities and demands made on governments.

“Non-financial firms have increasingly invested in financial assets at the expense of physical assets. … This is particularly the case with firms in advanced economies, but in recent years, developing and emerging economies have started to exhibit similar trends. …   Empirical evidence shows that rising profitability in the financial sector has played an important role in drawing in investment from the non-financial sector towards the financial sector.”

“The great thing about the new I.T. revolution, says Jeff Weiner, the C.E.O. of LinkedIn, is that ‘it makes it easier and cheaper than ever for anyone anywhere to be an entrepreneur’ and to have access to all the best infrastructure of innovation.”

“Despite representing only … 19 percent of employment [in 2007], multinational companies contributed 41 percent to overall productivity growth from 1990 to 2007.”

“His solution is to offer a new and altogether different kind of TV set, although in typical CEO fashion, he refuses to elaborate on what that might involve. He simply offers the assurance that a great deal of R&D investment is going into designing a new TV that could reverse Sony’s fortunes.”

“First, in a global economy, we need to be thinking more about the sources of apparent productivity growth. It matters greatly for wages and employment whether rising value-added per worker is being driven by domestic production improvements, supply chain efficiencies, or by productivity gains abroad. …

Second, government policies designed to increase incentives for business investment, such as accelerated expensing, may have the effect of increasing supply chain efficiency rather than domestic productivity. …

Third, we are effectively flying blind in terms of the effect of the global economy on US workers.”

Michael Mandel and Susan Houseman, Not all productivity gains are the same. Here’s why, What Matters, McKinsey & Company,  June 1, 2011.

The transformations in communications, transportation, transnational trade and investment flows, geopolitics, and access to advanced technologies that we summarize with the term globalization have greatly multiplied the number of businesses in every sector of the world economy competing for customers.

Moreover, companies are competing for a stagnant number of consumers and consumer dollars.   Although the buying power of working families is growing in the countries experiencing rapid economic growth (called the emerging economies), it is declining or barely growing in many of the advanced economies and in many other parts of the world.  This is greatly intensifying the competition among the worlds much larger number of competing business enterprises.

This environment of overheated competition puts enormous downward pressure on global job growth.  It drives the owners and managers of almost every business enterprise to pursue strategies that are good for the business but destructive to the world’s labor force much more aggressively than would be the case in an environment of moderated competitive pressures.  These strategies include:

The impact of these strategies on employment is fairly straight forward:

Overheated global competition will continue to do harm to global job growth until a global policy response creates a mechanism for market sharing and puts boundaries on the use of competitive strategies.  Without that response,  global rates of unemployment, underemployment, poverty, and political upheaval will continue to increase.  And the U.S. will not avoid sharing in these miseries.

“A new supervising service called Humanoid launched today, backed by funding from Google Ventures. Humanoid will rent out armies of humans (they have 20,000 workers already signed up to start) for $4.99 per hour to develop software, supervised by an algorithm.”

“China has made its first supercomputer based on Chinese microprocessor chips, an advance that surprised high-performance computing specialists in the United States.

The Sunway system, which can perform about 1,000 trillion calculations per second — a petaflop — will probably rank among the 20 fastest computers in the world. More significantly, it is composed of 8,700 ShenWei SW1600 microprocessors, designed at a Chinese computer institute and manufactured in Shanghai.”

It is said that at some point accumulating quantitative change becomes a qualitative change — a spring rain lasting forty days and forty nights becomes something other than a rainy spring!  Has the world had its forty days and forty nights of global technological change? – if not, it has surely had at least thirty days and the pace of technological change is accelerating.  Imagine a world in which a hundred million people (working below the U.S. minimum wage and supervised by Humanoid and similar programs) are writing software code intended to displace professional workers in law, medicine, teaching, business management, consulting, and government.

The core question for the 21st century is this: how will the world’s nations create socially legitimate entitlements to income in an era when only a minority of the world’s working-age people can obtain income through work and most of those who do work are paid less than a living wage?