“’There is a separation between the United States economy and stock prices,’ said Russell Price, a senior economist with Ameriprise Financial. He said in 2008, a lot of the market momentum came from sales growth overseas in emerging markets, and a weaker dollar that helped profits.”

“Globalization is one factor driving up profit for companies in the United States. According to a March 2011 paper by the Bureau of Economic Analysis, foreign earnings represented 40 percent to 45 percent of total profit between 2008 and 2009, against around 20 percent in the 1980s.”

“China’s economic growth may further slow in the first quarter to 8.5 percent, from 8.9 percent in the fourth quarter of 2011, with the potential risks of a sharper global deterioration and a sudden domestic property downturn raising the government’s concerns about policy changes, a senior economist from the State Council’s think tank said on Thursday.”

“After a decade in which GDP rose by at least 9% a year, it slipped back to ‘only’ a bit above 8% by the end of last year, according to the OECD. For the next decade, the OECD forecasts annual growth will hover at around 7%.”

The difficulties in the euro area have affected the U.S. economy. … In addition, weaker demand from Europe has slowed growth in other economies, which has also lowered foreign demand for our products.

A main indicator of business sentiment in Europe unexpectedly fell deeper toward recession territory Thursday, compounding concerns about the global recovery after signs of slowing manufacturing in China.

The survey of purchasing managers in the Chinese factory sector, released by HSBC, showed that activity declined in March for the fifth consecutive month, as the Chinese economy felt the pain of feeble global economic activity.

China has become a major market for European products as varied as heavy machinery and luxury goods, so a slowdown there worsens problems in Europe.

U.S. job growth is becoming more vulnerable to economic troubles that develop beyond the borders of the U.S. because U.S. corporations increasingly earn their profits in multiple regions of the world economy, perhaps not even primarily in the U.S.  This trend can be expected to continue as high end manufacturing, investments in science and technology, and populations of affluent consumers continue to grow in Brazil, Russia, India, China, South Africa (referred to as BRICS) and spread to more countries.

The global distribution of U.S. corporate profit centers links economic troubles elsewhere in the world economy to U.S. job growth in two ways: through the impact of those troubles on the investment decisions of U.S. corporations and through their impact on incomes of older Americans.

Adverse Impact on Corporate Investments in the U.S.

The U.S. is very likely to get a share of investment losses, even those losses that originate outside the U.S.  This is likely for at least two reasons:

A reduction in the flow of investments in the U.S. almost necessarily slows job growth.

Economic troubles outside the U.S. can have an adverse impact on spending by all Americans, but the adverse impact on spending by older workers and retirees is particularly direct.  Moreover, the size of the impact is growing as large numbers of baby boomers transition out of the labor force.  (The Pew Research Center estimates that about 10,000 people now turn 65 every day. )

Older Workers.  Older workers see retirement coming, so they are likely to increase investments for retirement.  Those with families are also likely to try to build investments to leave their children.

Increases in investment activities link the spending behavior of older workers directly to economic troubles outside the U.S. because decisions about how much income to invest are influenced by stock market trends.  And those trends are tied to profits earned by U.S. corporations outside the U.S. as well as those earned in the U.S.

To reach a given financial position, higher stock market returns translate into being able to keep more income for spending.  Lower returns translate into having to reduce spending and invest more income.  (In this regard, it is important to note that the majority of older workers are at the highest income plateau they will reach in their working lives, so investment increases must be offset by spending reductions.)

By lowering the rate at which stock values increase, troubles outside the U.S. reduce spending in the U.S. Less spending translates into slower job growth.

Retirees.  The link between economic troubles outside the U.S. and the spending behavior of retirees is even stronger.

Thus, through their adverse impact on corporate profits and stock values, economic troubles outside the U.S. reduce spending by U.S. retirees and government spending on behalf of retirees.   Slower job growth necessarily follows.

Most economists keep looking for a much needed shift to a sustained high rate of job growth in the U.S.  It probably will not come. 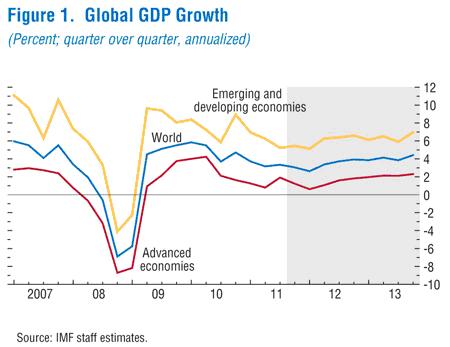 “Last year alone the daily volume of currencies traded was 220 per cent higher than that in 2001, and 65 per cent of the transactions were cross-border ― up from 54 per cent in 1998. Since 1990 foreign direct investment increased more than six fold.”

“Assuming a cyclic dynamics of national economies and the interaction of different countries according to the import-export balances, we are able to investigate … the synchronization phenomenon of crises at the worldwide scale. … The results support the theory of a globalization process emerging in the decade 1970–1980, the synchronization phenomena after this period accelerates and the effect of a mesoscopic [intermediate in size] structure of communities of countries is almost dissolved in the global behavior.”

“In today’s financial architecture, as with other supply chains, interdependent networks tend to concentrate in powerful hubs. For example, just two financial centers, London and New York, dominate international finance, and only 22 players conduct 90% of all global foreign-exchange trading.”

“So the degree of synchronisation has evolved fitfully. It is only in the most recent 1973-2006 period that we can speak meaningfully of anything resembling an international business cycle.”

“Globalization has made frontiers more porous. We see how one country’s policies, whether pertaining to work, the environment, public health, taxation, or myriad other issues, can have a direct impact on others. And we see such interdependence even more clearly in their economic performance: China’s annual GDP growth rate, for example, will slow by two percentage points this year, owing to sluggishness in the United States and the EU.”

“At the news conference Monday, Mr. Zhou said China was especially worried about Europe and its chronic sovereign-debt crisis … The world economy is highly globalized with a very active flow of capital worldwide,” he said. “All of these factors will have an impact on our monetary policy.’”

“Undoubtedly politicians should do a much better job of explaining to their constituents’ that what happens beyond the borders of their country-or city has implications for what happens inside their homes.”

National employment and income growth efforts are often ineffectual or only effective for a short time because of the ongoing policy push and shove of nations competing for advantage in the world economy.  What one nation does to improve its position in the world economy and grow jobs and incomes, other nations work quickly to undo.

One glaring and maddening consequence of this combination of reduced national policy effectiveness and global policy incoherence is that the recovery from the financial crisis of 2008-2009 has proceeded in fits and starts and seems too frequently to be on the verge of collapsing back into crisis.  Global job and income growth is being held back and governments are being denied the tax revenues they need to protect economically vulnerable people from the ravages of poverty.

Most U.S. economists and policy makers continue to hold out hope for a much more robust economic recovery than we have had.  But, one has to wonder whether a more robust recovery is possible while the world’s economic house is so geopolitically divided.

“Consider Stanford’s experience: Last fall, 160,000 students in 190 countries enrolled in an Artificial Intelligence course taught by Mr. Thrun and Peter Norvig, a Google colleague. An additional 200 registered for the course on campus, but a few weeks into the semester, attendance at Stanford dwindled to about 30, as those who had the option of seeing their professors in person decided they preferred the online videos, with their simple views of a hand holding a pen, working through the problems.

Besides the Artificial Intelligence course, Stanford offered two other MOOCs last semester — Machine Learning (104,000 registered, and 13,000 completed the course), and Introduction to Databases (92,000 registered, 7,000 completed). And this spring, the university will have 13 courses open to the world, including Anatomy, Cryptography, Game Theory and Natural Language Processing.”

Stanford is only the tip of a global iceberg of educational capacity growth that is beginning to dump huge numbers of well educated workers into the world economy.

A big question for state university systems:  If you are the son or daughter of a middle class family in China or India or Kenya or Peru, why settle for an online education at State U. when universities of the caliber of Stanford, MIT, and Harvard offer unlimited enrollment opportunities?

For more on this issue, see my previous post:

Too Many Well Educated Workers: a Global Problem and a U.S. Policy Dilemma, February 29, 2012